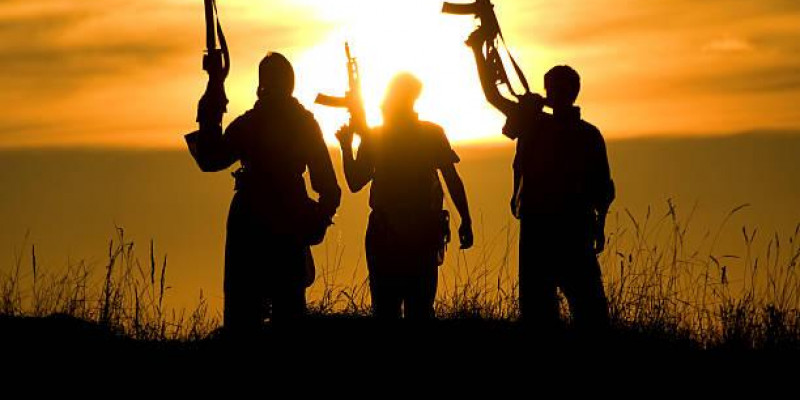 Is The Great Lakes Region A New Jihadist Battleground?

For many years, the Middle East has been known as a haven for terrorist groups. That narrative is dramatically shifting to new frontiers on the African continent. Terrorism linked to radical Islamist movements has reached a record year, both in terms of the number of incidents and deaths. The Global Terrorism Index, which measures terrorist incidents around the world, shows that deaths linked to terrorist attacks were more prevalent and in many places across Africa.  Recently the US State Department has designated ISIS-DRC and ISIS-Mozambique as terrorist organizations that are stoking fears in the region. The expansion of ISIS affiliates into sub-Saharan Africa has led to a surge in terrorism in many countries in the region," reports the Global Terrorism Index.  "Seven of the 10 countries with the largest increase in terrorism were in sub-Saharan Africa: Burkina Faso, Mozambique, DRC, Mali, Niger, Cameroon and Ethiopia".  Much as Jihadists have long been active in Africa when late al-Qaeda leader Osama Bin Laden made Sudan his base before moving back to Afghanistan in 1996, there is a sense that the new wave of jihadism sweeping across the continent in general and the Great Lakes, in particular, is gaining more currency. The US State Department's coordinator for counter-terrorism, Ambassador Nathan Sales, says both IS and al-Qaeda have shifted much of their operations away from their heartland in Syria and Iraq to their affiliates in West and East Africa.

The regrouping of these terrorist organizations has revived haunting memories of past terrorism incidents that rocked the region when Osama Bin-Laden masterminded the US embassy twin bombings in Nairobi and Dar es Salaam in August 1998 that saw more than 200 people killed. The 1998 East African bombings became a jihadi watershed moment and marked a new chapter in the fight against terrorism where the US mobilized the coalition of the willing to take on jihadists that threatened international peace and security. Security gurus in the region are now confronting new security threats following recent attacks by Islamist militants against civilians, government properties, key installations and foreign interests in the country’s northern province of Cabo Delgado,  The insurgency that rose in 2017 now directly threatens Africa's largest gas project. After capturing the port town of Mocímboa da Praia in August 2020, the Islamic State-affiliated insurgent group, which is referred to as Ahlu Sunnah Wa-Jamaa, recently conducted its most brutal and sophisticated attack by seizing the coastal town of Palma, close to the Total-operated liquefied natural-gas project.

These attacks are not a strange phenomenon to Mozambique. The last three years have witnessed an escalation in the levels and sophistication of armed violence in Mozambique’s Cabo Delgado province, which has a history of local grievances over marginalization and poor governance, failed expectations of rising prosperity following the discovery of natural gas in 2010, and links to transnational elements of Islamic State, also known as ISIS or ISIL resembling a pattern witnessed in other conflicts on the African continent. The conflict has forcibly displaced an estimated 670,000 people out of a total population of 2.3 million, creating a new humanitarian crisis. Al-Shabab one of the affiliates of  Al-Qaeda which has entrenched itself in Somalia for years has created instability whose effects have spilt over to the bordering regions in Kenya and is now inspiring violent groups in Mozambique and the Democratic Republic of Congo.  In Somalia, Al-Shabab terrorist activities saw in 2007, the African Union launch on the request of the U.N. Security Council, its Mission to Somalia (AMISOM) with the involvement of 11 African nations and roughly 20,000 troops deployed in the field as well as important financial and technical backing from Western nations.

There is also a growing concern in Somalia, which has drawn some of the strongest comparisons to Afghanistan after the Taliban takeover. Somalia has suffered state collapse and decades of civil war before an insurgency by the al-Qaeda-affiliated al-Shabab group began in the mid-2000s which now controls vast swathes of the country. The internationally-backed government has struggled to regain control of much of the country and is reliant on African Union troops operating under a UN Security Council mandate  The Somali government was meant to take the lead on security operations by the end of this year, but that looks unlikely due to questions over the army's capability. Samira Gaid, head of Somali security think-tank Hiraal Institute, says Somali forces are even less prepared to halt a potential militant offensive than those in Afghanistan. Tangible support towards the rebuilding of the Somali security forces has been minimal. “Somalia is still under an arms embargo, so we are unable to purchase the type of weaponry that Afghanistan had."  She says. But even in Somalia, the focus has shifted to how and when to end foreign assistance. The EU has already started cutting back its funding, and the government is running out of time to get itself ready to be self-sufficient.

Kenya has suffered some of the worst jihadist attacks in the region, with the government struggling to control the northeast of the country where the Al-Shabab terrorist group evolved.  Uganda which is still reeling from twin suicide attacks that ravaged Kampala during the FIFA World Cup final in July 2010 killing 74 people and 70 injured remains high on the radar of the terrorists. With the expansion of the Islamic State group (ISIL or Da’esh) in DR Congo under its affiliate, Allied Democratic Forces (ADF), security tensions remain simmering. A few weeks ago, Kenya and Tanzania experienced terrorism-linked incidents, which security experts say point to spillover from Cabo Delgado, a new headache for the region’s security agencies. In that same week, a gunman, 29-year-old Hamza Hassan Mohamed, shot dead four people in Tanzania, including three police officers, before police officers contained him and put him out of action.

This development came days after Kenyan security personnel in Mombasa arrested two suspected terrorists, one of whom is Tanzanian, and found two AK-47 rifles and explosive-making materials in their car. Security agencies said they were suspected of planning to blow up several installations on the anniversary of the death of radical Muslim cleric Sheikh Aboud Rogo, who was shot dead on August 27, 2012, in Mombasa. These incidents have seen both countries’ security agencies beef up surveillance, fearing that the remnants of Mozambique ISIS in Cabo Delgado might be regrouping and re-organizing in East Africa after losing their five-year stranglehold on the gas-rich region, and their presence is likely to breed a new wave of radicalization and terror across the region.

From Somalia, DRC, Uganda, Kenya, Tanzania and now Mozambique, jihadist groups have tapped on the sentiments of locals after years of accumulated grievances that have been brewing for generations radicalizing the marginalized sections of society. This has ultimately helped them recruit mainly youths who have become victims of systemic exclusion by their governments.  Despite recent insurgencies in the Great Lakes region presenting themselves as an extension of global jihadi movements such as the Islamic State group and al-Qaida to bolster their image; there is very weak linkages to these movements and little financial or military support at any meaningful level. However, they shouldn’t be undermined for they pose major security threats to a region that is already home to local militias and reeling from conflict.

The dynamics of these threats considering the recent escalation, security dimensions and major economic impacts at the domestic and international levels, as well as the outlook for the region has made security gurus ponder on how to contain insecurity spillover effects that are arising from these jihadist activities. The rout of Islamist insurgents in Cabo Delgado, northern Mozambique, by Rwandan forces has set off alarm bells in Kenya and Tanzania, where some of the fighters originate, with intelligence agencies on high alert after reported re-entry of some of the fleeing suspects.  Containing and countering violent extremism is increasingly featuring on top of the security agenda among countries and hence there is an extraordinary consensus on the need for security agencies to collaborate and coordinate to foil their operations in a region that has stubbornly remained vulnerable to conflict and insurgencies.