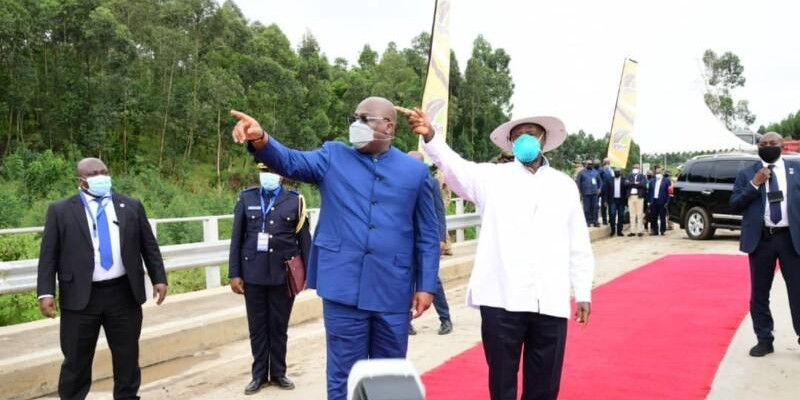 Understanding President Museveni’s Manoeuvres In The Democratic Republic Of Congo.

The election of President Felix Tshisekedi in the Democratic Republic of the Congo (DRC) first democratic transition of government since Independence was seen as a watershed moment to start a fresh chapter in a mineral-rich country that has been bedevilled with instability and conflict. Notwithstanding gross electoral malpractices, the ascension of President Tshisekedi into power has demonstrated optimism and cast him as a progressive leader ready to cure DRC of her past political demons, build a new power base and political alliances to steer clear of the bottlenecks that have plunged the country into an abyss for decades. After breaking ranks with Kabila-coalition, he seems to be on the path to chart a position that will define how DRC interacts with her neighbours. It’s this posture that has seen him develop a special relationship with President Museveni- a relationship that has morphed into adventurism. So what does this bromance mean to the region’s geopolitics?

Uganda and the Democratic Republic of Congo (DRC) have embarked on a 223km road project linking the two countries, with the project envisioned to boost cross border trade, improve security and connectivity between the two countries. At the groundbreaking ceremony held at Mpondwe (Uganda) and Kasindi (DRC), President Museveni and his DRC counterpart Felix Tshisekedi said the infrastructure will transform the socio-economic welfare of the citizens in both countries. President Tshisekedi described the project as a reinforcement of relations between the two neighbouring countries. The official narrative is that the infrastructure project is part of a coordinated effort between the two countries to promote trade, investment and integration among the people of East Africa. Observers believe the infrastructure developments will boost business in terms of commodities such as food products, gold, and manufactured goods such as textiles and plastics that Congolese traders buy from Uganda. The roads to be built are believed to knit together an area of 223 kilometres that have been impassable creating necessary connections to major markets in Eastern DRC. They include Mpondwe/Kasindi to Beni (80km), Beni-Butembo axis (54km) while the third (89 km) will start from Bunagana border town, through Rutshuru to Goma, the capital of the North Kivu Province.

The diplomatic relations between Uganda and the Democratic Republic of Congo (DRC) have for decades beem oscillating between conflict and cooperation. It dwindled to its lowest point in 1998 after Uganda refused to withdraw its troops from parts of eastern DRC. For two decades, the Democratic Republic of Congo (DRC) and Uganda have been litigating at the Hague-based International Court of Justice (ICJ) over the latter’s invasion between 1998 and 2003. The ICJ gave its ruling requiring Uganda to pay DRC reparations for injustice committed. Despite Uganda's denial of its plunder and pillage in the Congo conflict, the Ugandan government continues to deny a UN report accusing it of involvement in the armed conflict in the Democratic Republic of Congo. But analysts believe this cooperation will mend a frosty and broken relationship.

Meanwhile, there is a growing concern within a section of Opposition and civil society in Uganda over Uganda’s interests in the DRC. It is increasingly becoming difficult to divorce our foreign policy and President Museveni’s agenda to turn Uganda into a cockpit of regional gunboat diplomacy. There is a feeling in some quarters that Museveni’s interests trump our national interests. Legislators are also questioning why the country should carry the burden to foot the bill of infrastructure in DRC when there is a lot of dysfunction at home.  Uganda’s most compelling official argument in DRC adventure is premised on the need to secure markets for Ugandan goods and drive the integration Agenda which will see DRC join the East African markets. To a keen observer, it’s a combination of strategic geo-political positioning and military-prenuership.

For many years, Uganda has been a conduit for the illegal exploitation of minerals in the eastern Democratic Republic of Congo (DRC) which has been used to fuel conflict. For instance, in the period between December 2019 and November 2020, Gold massively outperformed other export with cumulative earnings hitting $1.7b (Shs6.3 trillion). The earnings represent a 44 per cent contribution out of total exports, which during the period stood at $3.8b (Shs14.3 trillion), according to data from the Bank of Uganda. The history of Uganda acting as a conduit for conflict blood minerals is well documented. A UN report indicates that well-connected generals (including Museveni’s brother) created entities headquartered in Kampala to facilitate illicit trade. There are genuine fears and concerns that Uganda’s infrastructure in Eastern Congo will ease this illicit trade that has undermined efforts to stabilize the Democratic Republic of Congo.

Uganda’s government argues that Congo is a vast untapped market and better infrastructure is one way of unlocking this market.  Trade data from the Bank of Uganda supports the government’s claim. When formal and informal trade figures are summed up for five of Uganda’s neighbours, DRC tops the list with the largest source of export surplus earnings.  Uganda earned a $241m trade surplus from DRC in 2020. An estimated $177m from informal trade pushes the figure to $418m in trade earnings. South Sudan was Uganda’s second-largest source of export earnings in 2020. Uganda earned $276m from goods exported to the country, slightly above DRC’s formal trade earnings. Amidst shifting and uncertain trade policies in the face of trade wars and border disputes by neighbouring countries, Uganda views the Congo market as the next important destination for her goods. Rwanda closed its border with Uganda in 2019 and Kenya has become unpredictable, after temporarily banning maize, sugar, eggs and chicken from Uganda in the past two years.

President Museveni has in the recent past managed to build an image as the regional powerbroker: heading peace efforts in the region; intervening in Somalia to prop up the government in Mogadishu, and siding militarily with President Salva Kiir in South Sudan’s domestic political cum military conflict. Such efforts have put him in the spotlight with observers calling him both an arsonist and firefighter. Domestically, Museveni’s grip on power is as strong as ever. Recent reshuffles in the military have demobilized powerful NRA historicals from command thereby leaving him (and his son) firmly in control of Uganda’s armed forces. There is no end in sight for Uganda’s regional military adventurism.

President Yoweri Museveni has also struck a deal with DRC President Tsisekedi to deploy Uganda People’s Defence Force troops in Eastern DRC to engage in combat operations against remnants of the rebel outfits. Museveni’s manoeuvres in DRC has raised eyebrows in the region. For one, Uganda’s military intervention in DRC may renew a new scramble that will revive old rivalries between Uganda and Rwanda especially at the time when bilateral relations between Uganda and Rwanda are at their lowest moment.   For geopolitical reasons, Kigali fears Kampala’s military involvement in DRC. But this time the situation is slightly different, and a little more complex. Kagame has already claimed that Uganda supports rebels that are hostile to Rwanda which are regrouping and still active in Goma. Kigali does not want a super-strong DRC free of rebel activity. The total stability of Eastern DRC would rob Kigali of much-needed conflict blood minerals to keep the economy running. Uganda’s involvement could tip the balance in Kinshasa’s favour vis-à-vis potential Kigali’s economic fortunes that accrue from pillaging her natural resources. At the same time, Kagame needs to keep a foothold in DRC to ward off economic hardships in Kigali which have been caused by COVID-19 disruptions rapidly deteriorating economic conditions.

As Uganda's President Yoweri Kaguta Museveni and Congo's President Tsisekedi met in Mpondwe to launch a border Project, there was a sense that old enmities and old hysterias have waned over the horizon.  It’s hard to think now, in our seemingly unstable great lakes region, just how inescapably, grotesquely complicated Kampala and Kinshasa relations were in 1998. The meeting of both Presidents offered just a taste of the hope and new chapter devoid of animosity that defined for a longer part the relations between both countries.

To the untrained eye, it is simple to view this relationship as President Museveni’s attempt to steer the East African Integration Project that has been stagnated by the crassness of our petty politics and sometimes mutual suspicions. But for anyone familiar with the intricacies of Great Lakes geopolitics, it is typical Museveni adventurism that has seen him cut the image of a regional hegemon who never ceases to stretch his expansionist tentacles whenever an opportunity presents itself.

President Museveni’s adventurism is only the start. It doesn’t only point to the fragile nature of our geopolitics, but also offers a canvas for many of the region’s political tensions. No sooner had President Museveni commissioned the road at Mpondwe than President Kagame met President Tshisekedi in DRC. This demonstrates that the East African Integration project which DRC is about to join is replete with deep-seated machinations and has never been free of political controversy. Politics has always bubbled away under the surface. There is a feeling that President Museveni and President Kagame’s battle for influence in the region has gnawed any opportunity for a meaningful political and economic integration project.

For one thing, the addition of Rwanda, South Sudan and now Somalia and DRC pending admission has created a large integration Project too big that it has diluted what has traditionally been a core three-member country that enjoyed historical connections in the defunct East African Community. This has therefore created a sense of isolation and nationalistic sentiments that have reinforced rather than dissolve our apartness at a time when unity and solidarity are needed more than ever.