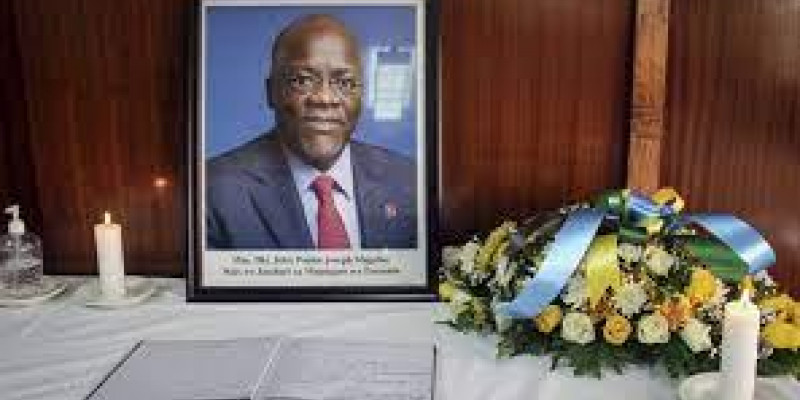 The death of President Magufuli took the region by surprise. There is no doubt it will disrupt both domestic and foreign policy contours of the members of the East African Community in many fundamental ways. His passing raises urgent questions about whether Tanzania’s position and foreign policy in the region will change direction or stay the course. According to close observers, the late president’s legacy has drawn mixed reactions from within and outside the country. Magufuli came to power in October 2015 on a populist message of stamping out corruption. He had campaigned on the lofty theme and nationalistic stance of putting Tanzania first. He then went on to fix the economy, steer the economy to middle-income status and for once put the country’s image in the region on a high pedestal.

After his death, as President Samia Suhulu Hassan takes over, one can’t help but wonder the extent to which Magufuli’s legacy will be assessed and examined in light of achieving the East African Integration Project. There is an extraordinary consensus that on the national front, Magufuli delivered and he successfully crafted Tanzania in his new image. It is helpful to look at Magufuli’s legacy along critical pillars of the East African Integration. The one he gets too little credit for, where he left an indelible mark is enforcing East African Community integration agenda, specifically on easing trade transactions across the borders.  Presidents Magufuli and Museveni launched mutukula One-Stop border post which was instrumental in expediting and easing the movement and clearance of goods and people across the border by easing border procedures and trade documentation through automation.

In December 2018, President Uhuru and President Magufuli launched the Namanga One-Stop border post and directed the border agencies to facilitate small traders by allowing them to operate freely across the borders instead of using threats to demand bribes from them. President Magufuli said that the EAC had embarked on the construction of 15 OSBPs across the region to promote intra-regional trade and operationalisation came with benefits especially for travellers, tourists and traders by reducing the amount of time they spent at the border.

President Magufuli’s death was a hiccup to the launch of the East African Crude Oil Pipe Line Project for which he had demonstrated a willingness to fast track.Uganda suspended the launch of the Tilenga Development oil-pipeline project to April 2021, to mourn President John Pombe magufuli. The postponement was announced in a statement issued by the Petroleum Authority of Uganda stating that "President Magufuli's astute leadership set a strong foundation for the EACOP project, with key milestones that included the Inter-Governmental Agreement in 2017, and initiating of the Tanzania Host Government Agreement in 2020."

When ‘The Bulldozer’ came to Uganda for the 2016 inauguration ceremony of President Museveni, H.E John Pombe asked his Ugandan counterpart to quicken matters of the crude oil pipeline. Just months after that inauguration, Uganda abandoned the Kenyan route through Lamu and focused on the Hoima-Tanga route. Uganda went on to register several key milestones in an expedited manner. Magufuli truly deserves credit from all Ugandans for his instrumental role, as proclaimed by Uganda’s oil and gas industry regulator. Magufuli who had personally promised to individually ensure fast-tracking of the project, and to a great extent perfectly did, died only five days to the scheduled launch of the EACOP project.

The 1,443km, 24-inch diameter heated and buried crude oil pipeline route starting from Kabaale, Hoima in Uganda to Chongoleani, Tanga in Tanzania was selected for being more feasible—shorter, cheaper due to a lower tariff—is expected to cost USD 3.5 billion. The EACOP project, one of the various infrastructure projects initiated under his stewardship his short-lived five- and half-year reign that could potentially be a cornerstone for re-energized regional economic integration.

Under Magufuli’s quick-witted leadership, works on the country’s 2561km SGR project worth $US 6.7bn commenced in April 2017. The project is part of the East African Railway Master Plan serving the East African community. Tanzania’s part of the project intends to link the Indian Ocean port of Dar el Salaam with Mwanza on Lake Victoria and Kigoma on Lake Tanganyika, and extend to the neighbourhood—Rwanda and Burundi. Unlike some of her East African counterparts like Uganda, which have hardly any progress on the SGR project, construction of Tanzania’s 300-km SGR section from the commercial capital Dar el Salaam to Morogoro was 90% complete by August 2020.

Insufficient infrastructure has been a major hindrance to the region’s economic integration. The once trendy tagline, “What would Magufuli do?” serves a great purpose for a critical assessment of the potential impact of Magufuli-led regional infrastructure development to East Africa’s economic integration, for which he passionately advocated during his reign as chair of the East African Community Summit. A well-developed regional infrastructure is a key to internal and intercountry trade, industrialization, job creation and regional socio-economic development.

His “Hapa Kazi Tu” slogan that changed the Tanzanian way of doing things from a laissez-faire approach to result-oriented government efficiency, not only led to economic growth—elevating Tanzania to a middle-income status, but also set a great precedent for the region and Africa as a whole. The bulldozer’s approach instilled a new creed of work ethic and frugality in the public service. The African Union estimates that $50 billion is lost to corruption and other financial crimes across the continent each year. Magufuli’s unique and successful crusade against government corruption and funds embezzlement, especially his sweeping reforms into the mining sector shall be part of his legacy. Magufuli went head to head with gold mining giants—the UK-based Acacia Mining and the Canadian-based Barrick Gold, famously defying the assumption that African states are unable to take on big multinationals and earn the victory, especially in the mining sector. His bold action eventually resulted in Acacia being outlawed in Tanzania and Barrick agreeing to a more equitable share deal over gold from its mines in the country and other substantial concessions to the Tanzanian government.

Infrastructure development is a stimulus for growth and development.  Infrastructure contributes to growth and development via productivity gains, reduction of transaction costs, increasing the durability of capital goods, fostering higher trade and investment, expanding demand and supply diversification and achieving economies of scale and scope. Financing remains a major constraint in Low Developed Countries. Recent studies have estimated the financing gap for infrastructure development between US$1.25 and US$1.5 trillion per year, an amount equivalent to 5–6 per cent of developing country gross domestic product (GDP). With most of the current investment coming from the public sector, Magufuli’s thrifty approach in dealing with public expenditure, public resource appropriation and resource management has demonstrated that Africa could potentially overcome the fiscal trap and hence substantially increase investment in infrastructure development to further accelerate growth and poverty reduction.

However, Magufuli’s presidency was replete with inward-looking policies that were increasingly seen as nationalistic yet alienating the common market principles that were put to oil the wheels of the economic integration project. Shortly after assuming office, President Magufuli banned Kenyan products from accessing Tanzania Market where Kenyan milk firm, Brookside, was stopped from collecting the product and directed that all milk produced must be processed locally.

In 2017, President Magufuli ordered the burning of Kenyan chicks illegally imported into Tanzania and auctioned about 1,125 cattle from Kenya after Kenyan Maasai herders crossed the border in search of pasture. Tanzania banned Kenya airways from flying into the county after Nairobi removed her from a list of more than 30 countries allowed to resume international flights into Kenya from August. In August, Tanzanian aviation authorities responded banned three Kenyan airlines from flying into the country in retaliation for Kenya subjecting passengers from Tanzania to mandatory 14-day Covid-19 quarantine. This was a disturbing development that did little to harness the East African Integration.

At the East African Legislative Assembly, many observers attribute the slow pace of integration to President Magufuli after missing summit meetings. A gesture that was increasingly seen as not being enthusiastic about the EAC integration. During his presidency, President Magufuli had implemented what analysts had called a ruthless nationalist economic agenda characterized by stifled regional and international trade and a blow to foreign direct investment (FDI).

The denial of the existence of COVID-19 while his people and many others across the world died tainted his image. Having downplayed the seriousness of the pandemic, his critics assert that his death is a typical case of chicken finally coming home to roost. Magufuli went to great lengths to quiet dissent—outlawing statistics that challenged official government data. His administration stopped releasing Covid-19 data at the end of April 2020, creating rifts between Tanzania and East African governments instituting strict Covid-19 measures.

With President Magufuli gone and new leadership in charge, East African leaders will have to reconfigure and discuss fresh terms for economic integration, the ratification of the African_Continental_Free_Trade_Area (AfCFTA) agreement, and the relaxation of bans on regional goods and services. Regional powers will approach the new president—who will look to them to boost her international legitimacy—with patience, prioritizing relations over photo ops. In the wake of Magufuli’s passing, Tanzania’s neighbours have an opportunity to resolve simmering trade disputes, smooth over clashes related to Covid-19 containment strategies, and deepen efforts towards cooperation and integration.

How Covid-19 Pandemic Has Shone Light On The East African Integration Project Crisis.