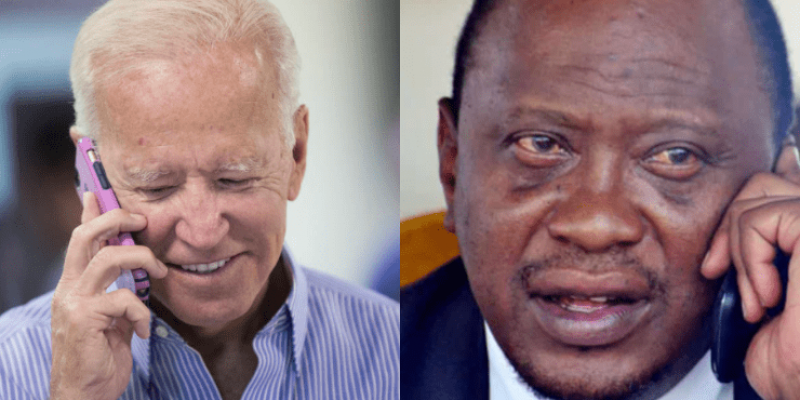 President Biden Wooes Kenya As It Takes Helm At Au Peace And Security.

Last week, US President Joe Biden reached out to President Uhuru Kenyatta in his first formal telephone conversation. It was one of those calls that observers have predicted that Kenya is going to be an anchor upon which the Biden Administration Foreign Policy contours in the Great Lakes and the Horn of Africa will be built. This comes at a time when Kenya has assumed the position as chair of the African Union Peace and Security Council

Kenya is an important player in the East African region because of its geographic and strategic position on the Indian Ocean. It is also an economic powerhouse that can guarantee American business interests. US President Joe Biden wants Kenya to use its position as chair of the African Union Peace and Security Council to help end conflicts that have bedevilled the Horn of Africa. According to a dispatch from the White House, The US President emphasized the urgency of the strong US-Kenya bilateral relations. He also retaliated against the United States’ continued commitment to working closely with Kenya to support regional peace and security, including at the United Nations Security Council.

As Kenya prepares to chair the AU peace and security council in March, the US intends to cooperate with her on security, refugees, climate change and other challenges. This cooperation is premised on Kenya’s leadership in the Horn of Africa and its commitment to counter-terrorism, economic growth, addressing climate change, and sustainable development. President Uhuru Kenyatta and his governments have been deeply involved in the war against terrorism in Somalia, backing AMISOM to fight Al-Shabab militants fighting the legitimate Somalia federal government.

Conflict threatens to tear apart the Horn of Africa with Ethiopia engaging in war in the Tigray region and turning the region into a hotspot for insecurity for the separatists who want to secede from the central government. The US is wooing Kenya to help in the ongoing crises, especially in Ethiopia’s Tigray region, where fighting has continued and led to the mass exodus of refugees. This coincides at a time when Kenya has assumed a role at the UN Security Council which it intends to use to help the continent address underlying crises especially in the Horn of Africa, climate change, sustainable peacekeeping operations and deepening transitions in countries like Sudan. Kenya’s role at the UN Security Council is increasingly seen as consequential since it will be guiding the continent’s position on major crises, in shaping security council debates, breaking geopolitical deadlocks and guiding the council’s collective action.

It’s tempting to see all this as a mere attempt to seek new alliances in the region, a temporary state of affairs. It would be naïve to ignore and overlook the longer-term trends in regional geopolitics, for which the current developments signal that Kenya is now increasingly being viewed as an anchor of regional stability. As Biden Administration comes to power, it is working to renew and reassert America’s role in the region. This is a radical departure from the Trump administration which had little interest in Africa. No doubt, Biden’s call to Uhuru is part of his administration’s effort to regain quickly U.S. influence in the region and the continent. The U.S. has a dense diplomatic network and a military presence in the Great Lakes and Horn of Africa. With that, the U.S. potential of attractiveness remains, and Kenya could be a strategic ally under Biden’s Administration as the U.S. has more important matters to deal with.