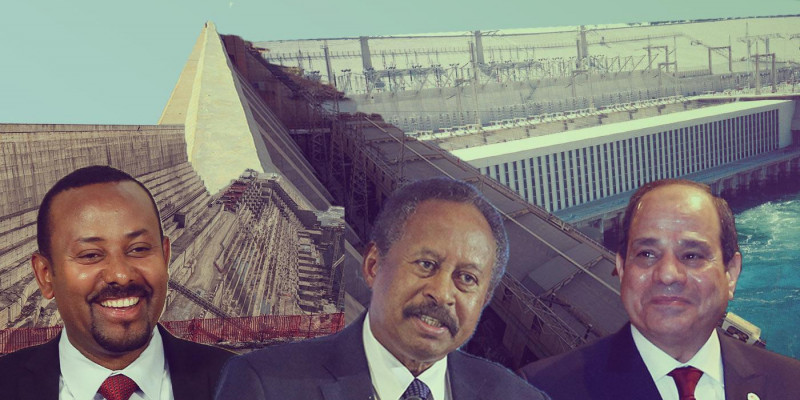 Grand Renaissance Dam Dispute: Is This About Water Security Or Fight For Geopolitical Hegemony?

For a thousand years, River Nile has been the backbone of civilisation and conflict. It has watered Egypt’s prosperity for centuries turning it into the economic powerhouse it is today on the continent. This has cemented River Nile as the bedrock of Egyptian progress giving it a sort of totemic importance within the Egyptian psyche and that any development that threatens to disrupt this position is met with extraordinary concern. The latest dispute comes after Ethiopia embarked on a grand and ambitious project called Grand Renaissance dam a few years ago.

It will be the largest hydro-electric dam on the continent on the Blue Nile River that runs from Lake Tana in Ethiopia to meet the White Nile in Khartoum, flowing north into Egypt at a cost of a staggering $4.5bn. The dam project has generated controversy in the region pitying Ethiopia with major players in the Nile Basin especially Egypt whose very survival on the Nile will depend on how fast Ethiopia fills its 74 bn cubic metre reservoir.

At the heart of this Egyptian-Ethiopia River Nile dispute, is the Anglo-Egyptian Treaty of 1929. The Ethiopians were not a party to the accord, which the United Kingdom purported to negotiate with Egypt on behalf of Ethiopia and several other Nile Basin countries where the British held sway. In 1959, three years after Sudan gained independence from Anglo-Egyptian rule, Khartoum and Cairo signed their own Nile River agreement. This 1959 agreement consecrated the Anglo-Egyptian Treaty—albeit with adjustments that benefitted both countries, such as increasing Egypt’s guaranteed annual allotment of water to 55.5 billion cubic meters and Sudan’s to 18.5 billion cubic meters. Again, Ethiopia and other countries were not consulted.

As a result, Ethiopia—whose highlands, in the form of the Blue Nile and, to a lesser extent, the Atbara (both of which are Nile River tributaries) supply the main river with 80 per cent of the water that flows downstream to Sudan and Egypt—has long maintained that the 1929 treaty and the 1959 agreement ignored its water needs. These historical rights gave Egypt veto powers to determine how much water should be used and shared by other riparian countries.  For many years, Nile basin countries have been negotiating a Nile basin cooperative framework that seeks to resolve longstanding issues that have stifled any attempt to reach a consensus on how to manage and conserve this precious endowment. This framework seeks to challenge Egypt’s historical rights which she has enjoyed to the detriment of other riparian countries.

Ethiopia views the current dam dispute as an attempt to perpetuate what it sees as Cairo’s unjust historical dominace over the Nile waters and Egypt fears that Addis Ababa will tilt her influence that she has enjoyed for so long. Egypt’s fears stem from the fact that the dam will worsen water shortages in Sudan and give Ethiopia a licence on how much water should flow downstream creating a sort of hydro hegemony.  Despite a decade of fraught negotiations among the Nile Basin Countries on how to share the Nile Waters, there hasn’t been an amicable understanding of how to equitably share this resource.

Sudan which has played the role of a mediator and arbiter views the dam as an opportunity to get the much-needed cheap electricity in the country and a redistribution of power. However, Egypt has long seen the GERD as an existential threat that could deprive its 100 million people of the water they need to survive in a changing climate. Some jaw-droppingly crazy proposals like the bombing of the dam by Egypt have popped up creating a climate of fear that observers believe could be a recipe for water wars.

US-mediated talks among Egypt, Sudan and Ethiopia in Washington are yet to lead to any breakthrough. Ethiopia has stocked fears and drummed up tensions for war in what it considers a legacy project that must be defended at all costs. Egypt has repeatedly tried to woo Sudan over to its position on the dam, even taking steps to end a decade’s-long border impasse. As the Ethiopian Grand Renaissance dam inches closer to completion, it has rekindled the environmental and political controversies and at the same time setting a centre-stage for a geo-political rivalry that has dogged the project right away from the start nearly 10 years ago. No one knows how far this dam will affect the geopolitics of the Nile basin but in many ways, it will reconfigure the balance of power for good.