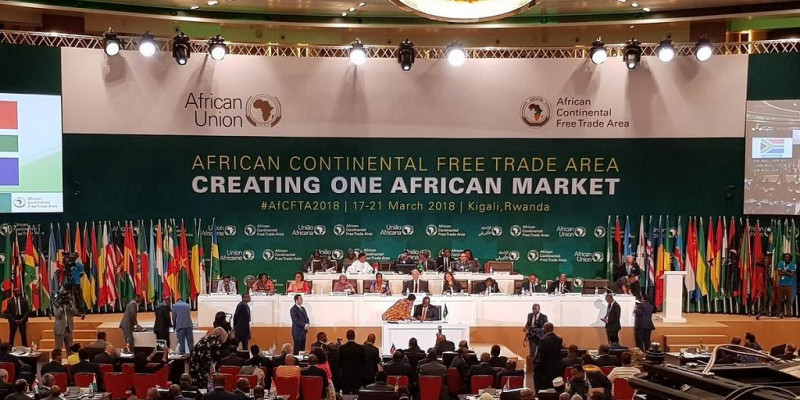 Afcta: A Giant Leap To The Future Or Another Grand Intervention Without A Clear-Cut Plan?

At the beginning of the year, African Countries signed and ratified the African Continental Free Trade Area amid great fanfare and optimism.  It was a culmination of years of hard-nosed bargains and compromises, negotiations and delays. Heralded by a significant body of economists as a turning point to the economic fortunes of the continent, this continental trade Area will eliminate tariffs on 90% of goods. Trade will grow to a combined GDP of a staggering $2.5 Trillion; the continent's income will increase by $450 billion and exports will skyrocket to $560 billion according to World Bank.

The AfCTA is without a doubt an ambitious and grand development. However, just like any trade deal, it's replete with many challenges and that could be presenting a big problem. For many years, Africa has largely been known as a large continent with a huge population and market for European and Asian manufacturing base. Then by one stroke of a pen, it’s envisaged that this is a blue-sky opportunity that will jumpstart itself into a major economic powerhouse rivalling established trade titans like EU, China and the US.

Yet it appears visionaries of the landmark deal have been largely motivated by emotions as opposed to insight. They have been carried by the often-regurgitated mantra of Africa rising that has blinded African governments from appreciating the roadblocks that have undermined her potential from leapfrogging her economic predicament. These efforts are emotionally gratifying but not economically sensible. It sounds romantic and fits Africa rising mantra but they are detached from real and hard economics which dictate that each country should have levers to protect its key sectors of the economy from vagaries of free trade. No country has ever leapfrogged from agrarian to a modern and industrialised economy by failing to shield its infant industries from foreign competition.

AfCTA will also be straight-jacketed by several roadblocks. How will a vast continent with different competing priorities and interests reconcile them? Uganda's priorities shouldn't be the same as South Africa's and South Africa's shouldn't be necessarily subordinate to Uganda's. Another hindrance is how the continent will navigate the intricacies of the African Free Trade Agreement and World Free Trade without breaching rules of protectionism.  Western and Asian Multinational Corporations have gained a foothold on the Continent and they will be fighting back since they are unlikely to cede the market they have controlled for centuries.

In many ways, AfCTA is the epitome of Pan African nostalgia: a self-indulgent exercise at weaning itself from the parasitic globalisation without a clear-cut plan. And so, what has been sketched out here is far more damaging than much of the wide-eyed horror of the impact of the COVID-19 pandemic on Africa’s economies whose heartbeat has been relying on global supply chains.

As we wait on how it will be rolled out and continue to process the ramifications, it's fair to say that AfCTA contains some radiantly good ideas (investing in motorways, ports, air and railway infrastructure to knit and connect the continent, improve and promote cross-border movement of people and goods, to name a few), and some jaw-droppingly bad ideas in equal measure. But most importantly, in an economic regime where the status quo has never felt more rotten– some new ideas and proposals can be greeted with much optimism.

The long-term consequences? Unknowable, and yet guessable. A more unbalanced and unequal Continent seems inevitable, with a handful of perennial heavy weights like South Africa, Egypt and Nigeria reaping big, and a revolving cast of make weights like Uganda, Rwanda, Tanzania enjoying the spoils and light weights like Central African Republic chocking from foreign competition.