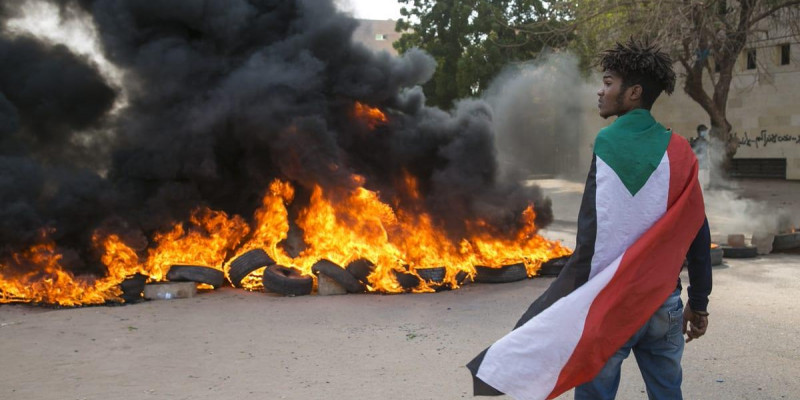 Seven regions of Sudan have declared a state of emergency after violent protests against rising food price broke out. Curfews have been imposed and schools have been forced to shut down in 10 cities across Darfur, North Kordofan, West Kordofan and Sennar. Buildings were looted and torched, and markets and shops ransacked and emptied. The joint military-civilian government believes loyalists of the former president, Omar al-Bashir, are behind the protests.

Millions of people in the country are surviving on shoe-string budgets as the cost of living continues to skyrocket amid economic difficulties. The Sudanese pound nose-dived against the dollar from 260 pounds (£3.40) in November to 315 pounds last month. The annual rate of inflation shot to 269% in December, up from 254% in November, according to the Central Bureau of Statistics.

After two years of the ouster of Former President Bashir, Sudan remains saddled with many challenges as it steers clear of the legacy of former President Omar-El Bashir. After the removal of Bashir, optimism and hope defined the sense of occasion. Juba Peace Agreement between transitional government and rebels was signed, Sudan was removed from the US black-list from list of State Sponsors of Terrorism (STT). Ties with Israel were renewed and the UN security council approved a withdrawal of UN Mission in Sudan. Much as this has helped re-establish and international credibility that had been brutally bruised by the autocratic rule of Omar- al-Bashir, there is a feeling that this has been used to create a smokescreen to deflate attention from economic doldrums besetting the country.

There is a narrative generating extraordinary consensus within Sudan and among keen observers and analysts that the removal of Bashir is yet to offer significant impact and that Transitional Military Council has so far succeeded in masking its intentions of high-jacking Sudan’s revolution by orchestrating behind the scenes plot between a re-centralised Khartoum and external agents fuelling the military to maintain power through a facade of choreographed transition. This illusion of a transitional government is intended to convince the population to complacently accept them yet it is increasingly seen as a window dressing and more or else a return of the past system that had oppressed them.

In a way, the current state of affairs in Sudan is a microcosm of most transitional governments in Africa: euphoria for a renewed and accountable leadership descending into attempts to re-centralise power and maintain old power centres. Again, there is a tyranny of raised expectations. What did we expect from a transitional military council? Partly, you suspect, Sudan’s malaise is a consequence of old brutal regime’s reluctance to shed its autocratic tendencies and the urge to consolidate its tight grip in power. But you can glimpse a certain institutional dysfunction there too, a never-ending cycle of impatience, restlessness, mindless tinkering and hunger for a new dawn that has defined the end of Omar-El Bashir’s reign.

That ceaseless anticipation for a new chapter, that longing for a new dawn, the thirst for permanent renewal: over time, angst and chaos have become a more reliable Sudanese currency than anything they have been able to muster post- Bashir era. And so, with the transitional mandate expiring, with no clear pathway to free and fair elections, with no strategy to wean military from Sudanese political landscape, Sudan again resembles the very administration they worked hard to oust with not the faintest scrap of a plan. Above all, what Sudan lacks leadership, inspiration. The military council may appear as democratic but, on some level, still comes across as suspect. In the end, Sudan’s long road to freedom remains murky and paved with many obstacles.