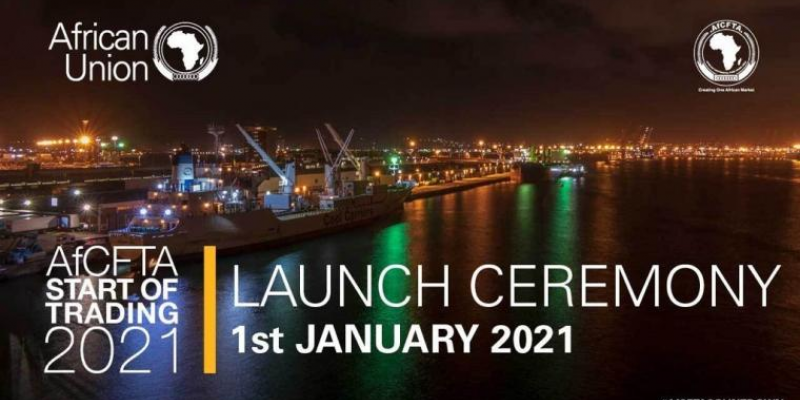 The African Continental Free Trade Agreement which was supposed to be operational by 2020, has finally come into force. The AU had originally planned to begin AfCFTA trading last year, but due to Covid-19 disruptions, the launch was pushed to this year. The operationalisation of the free trade zone was finalised at a virtual African Union (AU) summit held on Saturday and chaired by President Cyril Ramaphosa- the current AU chairperson. AfCFTA is anticipated to boost intra-African trade, promote industrialisation and competitiveness and contribute to job creation, and unleash regional value chains that are going to jumpstart Africa’s integration into the global economy.

The accord—styled as the biggest free-trade accord in the world in terms of population—gathers 54 out of 55 African countries, with exception of Eritrea. It aims to phase out all tariffs on commerce on the continent of 1.2 billion people, a goal that its champions say could give the trade a mega-jolt and improve the prospects of Africa as an attractive investment destination. By the time of writing this policy update, only 10 countries had both ratified the AfCFTA and submitted tariffs offers. These were Chad, Republic of Congo, Egypt, Equatorial Guinea, Eswatini, Gabon, Mauritius, Namibia, Sao Tome and Principe, and South Africa. Nigeria, Africa’s largest economy, had originally been one of most reluctant of the African countries to join the AfCFTA, has also ratified the treaty.

The summit also agreed to set June 30, 2021, as the deadline for countries to submit their offers for liberalising trade in five key areas of services – business services, communications, finance, tourism and transport. The leaders also agreed to give member states until December 31, 2021, to submit their offers in the remaining seven service sectors and to give priority to liberalising the health and education service sectors because of the demands on these created by the Covid-19 pandemic.

According to the International Monetary Fund (IMF), this would encourage intra-African trade to rise by around 16 per cent—an additional $16 billion (14.25 billion euros)—annually. Amidst so much optimism, there lie worries that AfCFTA will have a destructive impact on small manufacturers from low developed economies if borders are fully opened to imports from the continent’s economic heavyweights. Observers say this will hamper local industrialisation by exposing budding industries to stiff competition. With such fears in mind, a more progressive phase-out should be instituted for less developed economies. Achieving continental trade dividends of such magnitude, will not come cheap. It will require bold and deliberate investment in connectivity knitted together by motorways, railways, flight routes, energy pipelines, telecom networks and so on. So as the continent braces itself for Trade Zone of such magnitude, it remains work in progress for the continent to create such crucial links to tap into a floodgate of opportunities that will be created.