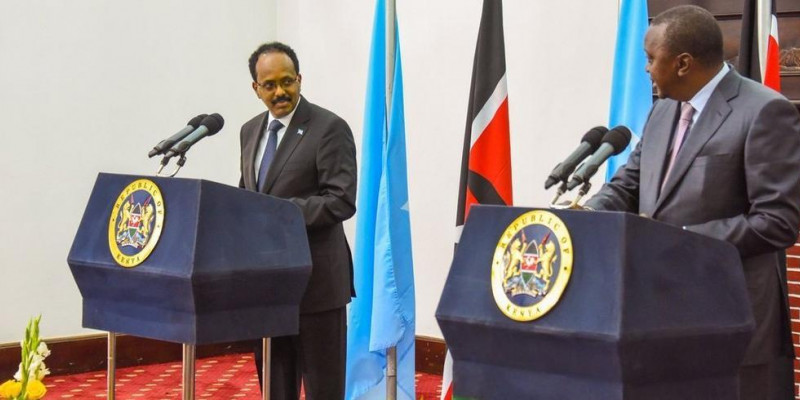 In a show of brinkmanship, Somalia's government has cut diplomatic ties with Kenya in what it describes as an attempt to safeguard the sovereignty and territorial integrity of the country. The genesis of the diplomatic standoff between Somalia and Kenya can be traced back in November when Somalia expelled Kenya's ambassador to the country and ordered its ambassador to return home.

While there has been animosity between the two countries, it appears the three-day visit of the leader of the breakaway territory of Somaliland has sparked the escalation of the tensions. The rift with Kenya is the culmination of years of steadily deteriorating relations. It came a day after Kenya’s president hosted the president of Somaliland, the northwestern region that declared independence from Somalia. It is believed authorities in Somalia have been angered by Kenya’s gesture of hosting the Somaliland leader with rituals akin to a visiting President.

Somaliland split from Somalia in 1991 as the country plunged into conflict and has since then been insulated from extremist attacks of Al-Shabab militia that have turned Somalia into a failed state with a weak central government unable to assert its authority and legitimacy across the country. Despite lacking international recognition, Somaliland has maintained its independent government, currency and security system and continues advocating for total secession from Somalia.

Somalia, however, considers Somaliland as part of its territory. Dialogue and talks for finding a political solution to unite the country have hit a snag in the past and it is increasingly becoming clear, there is the pathway out of this political deadlock soon.

Analysts believe that entangled in tough competition in the coming parliamentary and presidential elections slated for December 2020, President Mohamed Abdullahi Mohamed is stirring up altercations with foreign countries to win sympathy from the electorate by accusing Kenya of meddling in its internal political affairs weeks before a crucial general election. The rift with Kenya allowed the president to overlook calls for electoral reforms demanded by the Opposition.

The move to cut diplomatic ties creates a climate of uncertainty in the region after the United States recently announced its plans to pull its troops from Somalia — a move that Somali and other Western officials fear will embolden the Al-Shabab militant group to escalate its offensive across Somalia and the Horn of Africa.

Kenya and Somalia share a 430-mile border and have both been beset by violence dished out by the Al-Shabab with Kenya contributing more than 3,6000 troops as part of the African Union peacekeeping forces. They have also been engaged for years in a maritime dispute that is currently being adjudicated at the International Court of Justice at The Hague. While Kenya’s government has pledged to set up a committee to appraise and help deescalate the standoff with Somalia, it is highly unlikely that it is better placed to solve the deadlock.