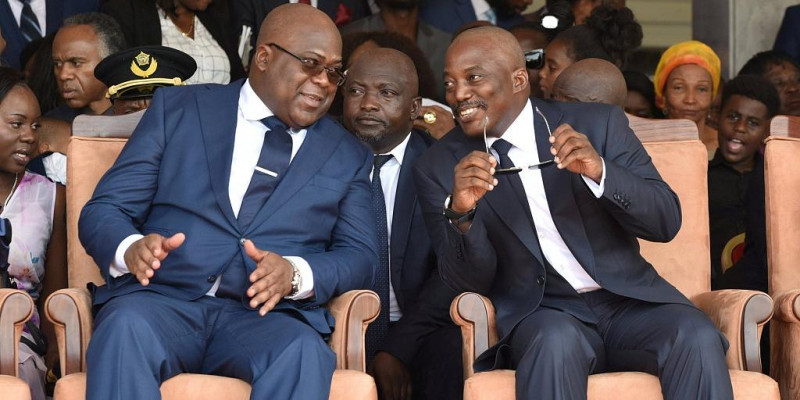 After 16 months of coalition government, President Felix Tshisekedi says his alliance with Joseph Kabila is over. And so, the marriage of convenience has been shortened by irreconcilable differences. It was not supposed to end like this. Not in a bitter split, with an uncompromising stance against calls for dialogue to resolve the standoff. And so, the marriage of convenience has been shorted by irreconcilable differences. After the first peaceful transfer of power in the history of the DRC, which took place in January 2019, observers of Congolese politics predicted that  Tshisekedi’s CACH alliance with Kabila’s Common Front for the Congo (FCC) was destined to a catastrophic failure. It has not been the easiest of coalitions, for reasons that go right back to the start of Tshisekedi’s Presidency, when he entered into a coalition with Pro-Kabila’s party.  It is a decision forced by circumstances after Tshisekedi has realised he can’t implement an agenda that had shot him into Presidency. The Congolese divide and deep-seated mistrust which pre-dated President Tshisekedi has now come out full throttle within his party ending the coalition government.

This has been the hallmark of Congolese politics since Independence. Tshisekedi’s and Kabila alliance- the audacious attempt to forge Congolese consensus has clanked to a grinding halt. Meanwhile, the clock is ticking for the potential political deadlock in Congo as both sides fail to resolve the stalemate and at the time of writing this policy update– no compromise had been reached on resolving the current political deadlock.

The collapse of consensus and the consequent paralysis of government engulfing the entire Congolese political landscape has added a note of shrill existential urgency to these already pressing questions. The question, as ever, is what form this crisis will take – and how will it be overcome. The democratic foundations of Congolese Politics have never felt more fragile, its democratic gains never more threatened, its future never more uncertain.

President Felix Tshisekedi is now headed to establish new alliances that will build a new government that will have a majority of seats in the national assembly. In recent months there have been disputes on issues affecting Congo's security, organization of elections, independence of the judiciary, and management of the sprawling country's territory. President Joseph Kabila who stepped down in December 2018 after he lost to Tshisekedi in a long-delayed election, still wields considerable influence because of the majority that his party holds in the national assembly and loyal public servants sprinkled across key government institutions.

Tshisekedi further threatened to dissolve the national assembly in case he does not get the majority he seeks. The president, who cannot dismiss the country’s prime minister, according to the Congolese constitution, will now seek to obtain his resignation. Observers say the struggle to shift the parliamentary majority in the national assembly from Kabila’s camp to that of Tshisekedi risks plunging the country into chaos. It poses to undermine the democratic gains that have been collectively achieved over the years.