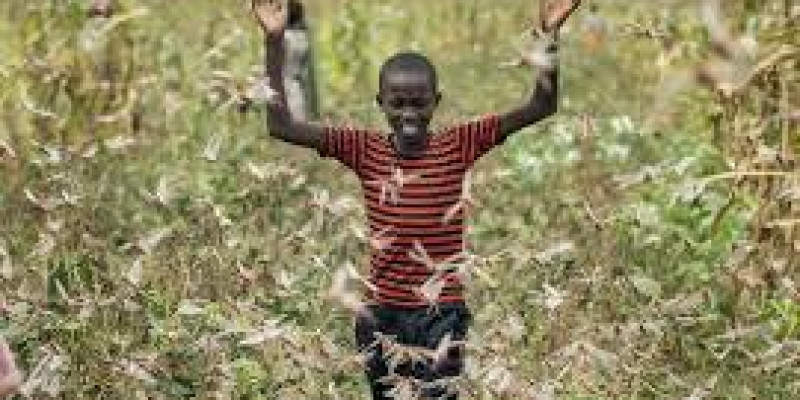 The Invasion Of Locusts And What It Means To The Governments Of The Great Lakes Region.

As an outbreak of billions of locusts hit parts of East Africa and great lakes region devouring its vital farmland, the United Nations warns that the region, already suffering from extreme hunger, simply cannot afford another major shock. The fortune tellers are also having a field day predicting a doomsday scenario with a possibility of a portent biblical end of the times. According to FAO, the locust invasion has affected Kenya, Uganda, Tanzania, Ethiopia, Somalia and Eritrea. The region must prepare to contain this impending disaster for locusts have the potential to squander the gains that have been gained over the years. Nobody at this point can count the cost with a degree of certainty what impact they will have on our economy. But there is no doubt a lot of damage has hit the agriculture sector which is the mainstay of the region’s economies.

The locust invasion is the biggest in Ethiopia and Somalia in 25 years, and the biggest in Kenya in 70 years, according to the Food Agricultural Organisation. If unchecked, locust numbers could increase 500 times by June, spreading to the whole of the great lakes region, becoming a plague that will devastate crops and pasture in a region which is already one of the poorest and most vulnerable in the world.

While farmers were relatively lucky as their crops had already matured or been harvested by the time they arrived, herders face another heavy blow as vegetation for their animals is consumed by the insects. Experts are also warning for the second invasion which is likely to happen between June and July since they have to lay eggs across the countries they have been moving to.

According to the Regional Food Security and Nutrition Working Group, East Africa is already experiencing a high degree of food insecurity, with over 19 million people experiencing food shortages and many millions on the brink of acute hunger. This new disaster bodes ill for the region in 2020. The erratic weather of 2019 and the decade prior have already severely eroded the capacity of families to bounce back from unexpected crises. And what becomes clear over the years is that virtually the great lakes region isn't safe from the seismic and accelerating consequences of unforeseen hazards like these which have been exacerbated by Climate Change.  The infestation has put food security in the region in jeopardy. Our agriculture with its heavy dependence on nature, sensitive to climate and atmospheric conditions, is particularly vulnerable more than ever before.

Experts are already warning that bees and other vital insects in the eco-system will be greatly affected threatening to ruin everyone’s livelihood. The danger of desert locusts and how it threatens food security and livelihoods in the region reeling from drought and deadly floods should attract deliberate policy interventions not ad-hoc and reactionary interventions which are devoid of ambition and seriousness in averting a catastrophe of such magnitude that threatens our very own existence. Tackling unforeseen disasters requires us to confront climate change, which in turn requires us to be bold and delve deep into our imaginations and envisage something that has happened a long time before, and for which we thus have no nearest previous frame of reference. It requires a long-term policy prescription and vision, and in places where we make last-minute interventions in times of emergencies, that’s always going to be a tall order. And yet, our governments’ panic, unpreparedness and willful deafness to the emergency – one in which it is by no means alone, but because of its sheer size, particularly culpable – still retains the capacity to surprise.