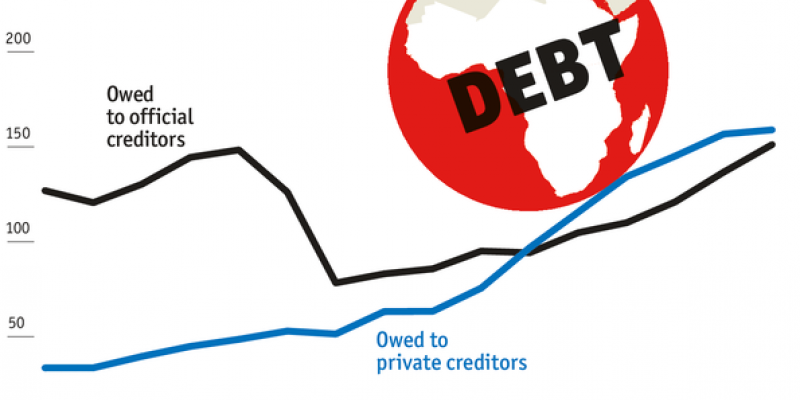 A report by Fitch Ratings recently warned that some countries in sub-Saharan Africa are in danger of slipping into a major debt crisis as debt burdens across the region rise at a faster pace and to higher levels than in other emerging markets.

According to the report, eight countries are already in debt distress and a further 18 are at high risk, leading to a heightened possibilities of rating downgrades and defaults. Debt situations in the region were already worrisome before the coronavirus outbreak with the number of defaults more than doubling since 2013.

An unprecedented oil price crash between March and April made it worse for Africa’s main oil exporters – Angola, the Republic of Congo, Gabon, and Nigeria – who rely heavily on oil revenues for fiscal and external financing and have few fiscal or monetary buffers. Countries that depend on tourism such as Cape Verde and Seychelles have also been badly affected.

Additionally, many sub-Saharan countries’ generally have weak credit fundamentals (beyond high public debt) that reduce their debt tolerance and resilience and leave them disproportionately vulnerable to the global coronavirus shock. Fitch predicts that the median of government debt-to-GDP for the 19 countries it rated in sub-Saharan Africa will rise (from 26 per cent in 2012) to 71 per cent by the end of 2020 compared to 57 per cent across other emerging markets.

More so, the median budget deficit is anticipated to widen from 4.9 per cent in 2019 to 7.4 per cent in 2020, a record high in the modern era. And the combination of lower GDP and wider budget deficits will trigger a jump in the median government debt ratio by 14 percentage points to 71 per cent of GDP at the end of 2020

The International Monetary Fund’s emergency support worth $8 billion is aimed at bailing out African countries contending with an unprecedented shock as economic, social—institutions are already overstretched. Many African countries were already struggling economically even before the full brunt of COVID-19. This is a difficult moment as economic performance for this year is projected to be the worst in 30 years. COVID-19 Health Crisis has morphed into full-blown economic, financial, and food crises which can be mitigated with a debt relief program.

If Policymakers in the developed world do not roll out debt relief interventions, the unsustainable debt levels present significant risks to global commitments to end extreme poverty.  A poorly managed debt crisis would set back progress towards the Sustainable Development Goals, as well as reverse the development progress made over the past decade after debt relief programs freed up resources for development in 30 African countries.

Scare For Insecurity And Hunger As South Sudanese Battle With Corona Pandemic.