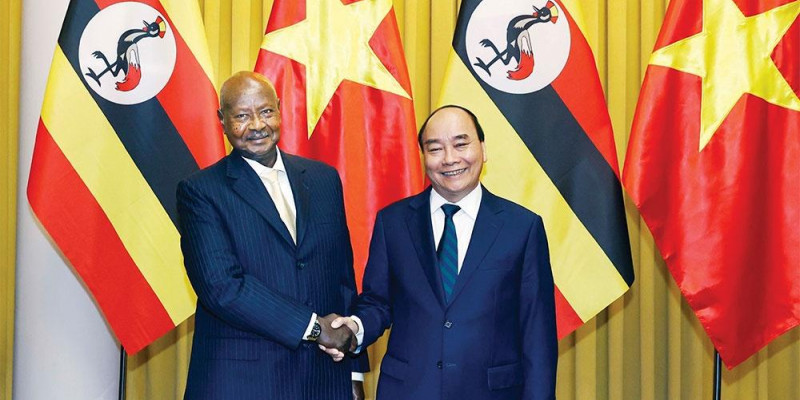 Museveni’s Pilgrimage To Hanoi In Search Of New Allies.

A few weeks ago, President Museveni concluded a three-day state visit to Vietnam where he was hosted by Vietnam Prime Minister Pham Minh Chinh.  It was not only Uganda's first state visit to Vietnam in 50 years but also Museveni's state visit outside of Africa after COVID-19 signaling Vietnamese’s importance in Uganda’s foreign policy. Receiving President Museveni, Party General Secretary Nguyen Phu Trong stressed the significance of the trip, saying it would usher in a new era where ties between the Communist Party of Vietnam (CPV) and Uganda’s National Resistance Movement (NRM) especially in the context of the two countries working towards the 50th anniversary of the bilateral diplomatic ties next year.

On social media, the President said ‘’While the Muslims got to Mecca for Pilgrimage and the Catholics go to Rome for Pilgrimage to the Pope, we the freedom fighters come to Vietnam as our Pilgrimage’’ As the first Ugandan Head of State to Visit Vietnam, I want to salute the heroic struggle. He added.

Much as the visit has been choreographed as a trip to pay homage to heroism of Vietnam’s struggle which resonates with NRM’s struggle that ushered them into power, it is now becoming clear that this was not just a symbolic visit but a trip to look for foreign direct investment to cushion Uganda’s economy that has been hardly hit by vagaries of COVID-19. No wonder Museveni returned home with several new deals finalized or newly placed on the table, important for Uganda as well as Vietnam.

For Vietnam, Uganda is a key potential market and a gateway to intra-Africa trade, especially under the African Continental Free Trade Area (AfCFTA), operational since January 2021. However, Uganda has expressed concerns about the balance of trade. President Museveni, Prime Minister Pham Minh Chinh noted that to boost the economic ties, Vietnam and Uganda need to step up trade and investment promotion activities, thereby facilitating the penetration of goods into the East African market and the Association of Southeast Asian Nations (ASEAN) as well. “With a market of more than 600 million increasingly affluent consumers, ASEAN [the Association of Southeast Asian Nations] presents a huge opportunity for the likes of Museveni and other African countries,” says Eric Olander, editor in chief of The China-Global South Project.

The leaders stressed that the two countries should closely coordinate to deepen their relations in a pragmatic and effective manner, saying the exchange of delegations, especially at the high level, would help enhance mutual understanding and political trust. To demonstrate the willingness of both leaders, Vietnam hosted the first-ever Uganda-Vietnam Business Summit and Trade Exhibition, which was intended to deepen bilateral trade, encourage foreign investment, and strengthen commercial ties between Ugandan and Vietnamese businesses. The President also visited the FPT Corporation, Vietnam’s leading IT firm, and the Vietnam Academy of Agricultural Sciences, and attended the Vietnam-Uganda Business Forum.

The Prime Ministers also pledged that the two countries will continue their mutual support at multilateral forums, especially at the time when Uganda is assuming the Non-Alignment Movement chairmanship from 2023 to 2026.  Trong said that Vietnam attaches importance to promoting its relations with African nations in general and Uganda in particular, adding that huge space remains for Vietnam and Uganda to boost their cooperation in all spheres.

They highlighted the importance of stepping up delegation exchanges and contacts in all channels, and maintaining coordination and mutual support at multilateral forums, particularly the United Nations and the Non-Alignment Movement. They asserted their determination to foster economic cooperation and increase two-way trade to be commensurate with the fine political relationship and the market scale of nearly 150 million people of the two nations.

The two leaders also emphasized the importance of agricultural cooperation, considering it one of the pillars of bilateral relations, with priority given to ensuring food security; and agreed to expand collaboration to education-training, information and communications, defense-security, health, and tourism. After their talks, the Presidents witnessed the signing of an agreement on visa exemption for diplomatic and official passport holders; and four memoranda of understanding on cooperation in diplomacy, education, information and communications, and agriculture technology.

The Prime Minister lauded the Uganda’s contributions at important multilateral mechanisms such as the United Nations, the Non-Aligned Movement (NAM), and the African Alliance. He called upon the two countries to continue their mutual support at multilateral forums, especially at the time when Uganda assumes the NAM Chairmanship for 2023-2026 and is going to host Non-Alignment Movement Summit in 2023.  The President also expressed his belief that Vietnam will successfully perform its membership at the UN Human Rights Council for 2023-2025, significantly contributing to peace and development and ensuring human rights.

The visit is seen as Museveni’s attempt at looking for new allies in the East after his government is increasingly getting scrutiny from the Western allies over human rights record and democratic credentials that keep depreciating as he continues to tighten his grip in power. Museveni’s choice of Vietnam speaks volumes on the president’s diversification strategy, at a time when Uganda’s economy faces tough headwinds.