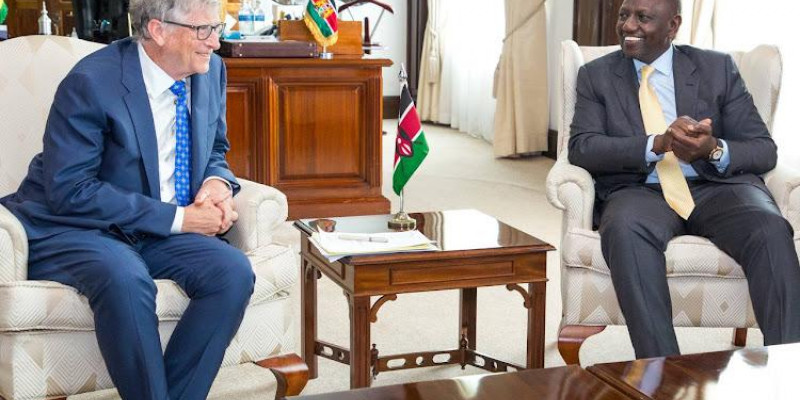 Bill Gates's Visit To Kenya And Its Implications On Africa's Food Systems.

A statement issued from his foundation says Gates visited national and local leaders, regional scientists and innovators and announced the foundation’s forward-looking commitment to support new innovations and ingenuity aimed at improving health, food security, and gender equality in African countries.  Bill gates’s visit is not coincidental that it comes at a time when Kenya has approved genetically modified organisms (GMOs) and broken free from a decade-long ban on the technology. Analysts believe that the radical policy flip-flop under the Ruto Administration will trigger a major shift towards evidence-based solutions to agricultural production, paving way for GMO cultivation where country’s farmers will realize the full benefits of a technology that will remarkably boost crop production and augment the livelihoods of thousands across value chains in the East African nation.

While the visit has been ostensibly presented as an opportunity to promote food security and Climate Change resilience in Kenya and the region. The first thing to point out is that there may be less to all this than meets the eye. Some observers say Bill and Melinda Gates Foundation supports large-scale industrial farming under the guise of a “green revolution”. Since 2016, the Bill & Melinda Gates Foundation has spent over $5billion on efforts to transform African agriculture; its flagship program, the Alliance for a Green Revolution in Africa, works to transition farmers to high-input industrial agriculture and scale up markets for commercial seeds and agrichemicals. Gates says these methods can boost production and lift farmers out of poverty.

Many critics, including African faith leaders and hundreds of civil society groups around the world, say the foundation’s agricultural development strategies are failing to deliver on promises and benefiting multinational corporations over small farmers and communities in Africa. “Gates has influenced the direction of agriculture to benefit the corporates,” said Million Belay, coordinator of Alliance for Food Sovereignty in Africa (AFSA), a coalition of 50 Africa-based groups. “His foundation has contributed hugely in weakening our seed, biosafety and agrichemical related regulations. It will take years to undo what they have done.”

Gates also influences how governments and academic institutions think about the future of agriculture in Africa, Belay said. “The narrative now is you need to use agrichemicals, high-yield varieties, GMOs and a host of other farm management techniques to feed yourself,” he said. “It will also take years to convince our elites the future is agroecology. As one of the most rich and powerful people on the planet, the doors of our governments are open to Gates while it is ajar for African citizens. He has to be called out and has to change direction.”

Leading experts in food security and nutrition are calling for a paradigm shift away from green revolution-style industrial agriculture and toward agroecology, which promotes biodiversity instead of monocultures, integrates animals to rebuild soils, and advocates for political and economic reforms to address inequities and social divisions. Diversified agroecological systems are more resilient, they say, and have a greater capacity to recover from disturbances including extreme weather events, pests, and disease. For an underfunded sector, Gates Foundation has taken over our Agriculture by arm twisting our policy makers.

Research published by GRAIN -a small international non-profit organization that works to support small farmers and social movements in their struggles for community-controlled and biodiversity-based food systems. They have uncovered all the Gate’s Foundation machinations in Africa. Bill Gates foundation grants are heavily skewed to technologies developed by research centers and corporations in the Global North for poor farmers in the Global South, completely ignoring the knowledge, technologies, and biodiversity that these farmers already possess.

And much of its grants are given to groups that lobby on behalf of industrial farming and undermine alternatives. The research further established that much of the funding was channeled to groups in the US and Europe, not Africa or other parts of the global South. The funding overwhelmingly went to research institutes rather than farmers. They were also mainly directed at shaping policies to support industrial farming, not smallholders. Analysts believe it’s bad for African farmers and bad for the planet. It is time to pull the plug on the Gates Foundation’s outsized influence over African agriculture.

Among the leading non-governmental organizations that have benefited from the generosity of Gates Foundation is Alliance for a Green Revolution in Africa which has been actively pushing the African Agriculture policy Agenda. AGRA is among the key conveners of the annual Africa Green Revolution Forum (AGRF) which calls itself the world’s premier forum for African agriculture and has been convening annual meetings for the past decade. Partners include some of the main global agrochemical corporations, such as Bayer, Corteva and Yara, and of course the Gates Foundation itself.

Unsurprisingly, its agenda is clearly oriented to push government policies towards more chemical inputs, fertilizers, and hybrid seeds. On its website, AGRF has a special section it calls the Agribusiness Deal Room which “has directly facilitated over 400 companies with targeted investor matchmaking and hosted more than 800 companies to explore networking opportunities”. This is clearly market matchmaking serving corporate interests, not farmers. Bill Gates’s visit in Kenya presents an opportunity for African countries to fight hunger, disease, and poverty. At least this can be attested by the Foundation’s statement that has announced $7billion for African programs over the next four years and setting up of foundation’s regional office in Nairobi. There is need by governments in the region to tread very cautiously in fully embracing the foundation’s schemes on the continent that have been couched in philanthropic lens yet they seem to be utterly shaped by sinister motives that have more to do with looking for new markets for their GMOs than helping African farmers.