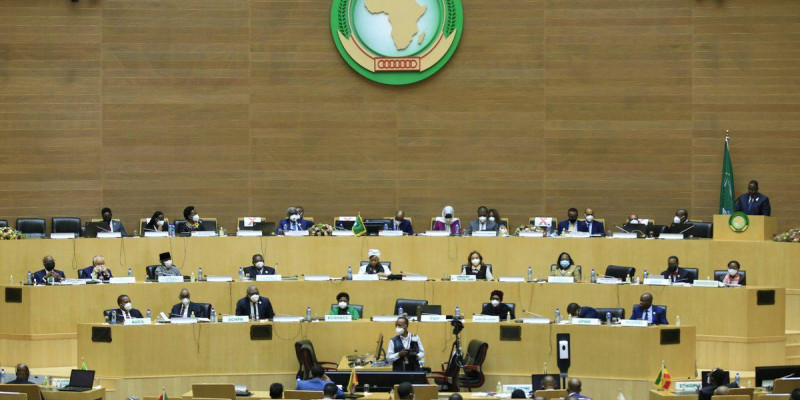 Silencing The Guns: Has The African Union Failed On Its Promise?

In 2013, African Union (AU) member state representatives gathered at its headquarters in Addis Ababa, Ethiopia to celebrate the body’s 50th anniversary. Amid the pomp and flair that befitted the sense of occasion, the leaders sat down to reflect and confront the tough questions of the day while taking stock of the progress that had been painstakingly achieved and what the continent’s future looked like for the next 50 years. After back-and-forth conversations, there was extraordinary consensus that conflict was one of the biggest impediments to achieving development. At the summit in Addis Ababa, the AU leaders resolved not to pass the burden of conflict to future generations, so they adopted Silencing the Guns in Africa by 2020 as one of the flagship projects of the wider developmental blueprint Agenda 2063.

African leaders committed themselves to work towards an end to armed conflict by 2020. They pledged not to bequeath the burden of conflicts to the next generation of Africans.  The pledge was followed by the adoption of the Lusaka Road Map to end the conflict by 2020. The document outlined fifty four practical steps that needed to be taken. They focused on political, economic, social, environmental and legal issues. They ranged from adequately funding the African Standby Force for deployment, to stopping rebels or insurgents and their backers from accessing weapons. Other steps included fighting human trafficking, corruption and illicit financial flows among many others.

As clock ticked towards the 2020 deadline, it was increasingly becoming clear that the targets set then were far from being realized. One of the reasons for the failure is that the 2020 goal was too ambitious given the number of conflicts on the continent. The second reason is that many of them were internal, arising from the grievances citizens had with their governments. This state of affairs appear to have been ignored from the outset by the framers of the campaign.

At the time of the Silencing the guns declaration, Africa had disproportionately high levels of conflict. State and non-state actors in Africa waged about 630 armed conflicts between 1990 and 2015. As 2020 deadline reached and there seemed to be no headway, the goal has been pushed to 2030. The measures to ‘silence the guns’ have been embarrassingly ineffective. Since the pledge was signed conflict in Africa has increased. 9 years on, the end of conflict, crime and wars is a grim reality that still haunts the present. It taunts us, belittles us, confronts us from an ever-increasing distance. Where did it go wrong? How, if ever, can it go right?

Across the continent, the guns are blazing with wanton abandon. In Ethiopia, the seat of the African Union, the conflict between government forces and the Tigray People’s Liberation Front (TPLF) has created a humanitarian disaster in the Tigray region creating a refugee influx in the region.  This conflict has shown the limitations that the AU has in conflict intervention, as the continental body has not yet succeeded in negotiating a peace deal initial that will deescalate tensions.

In the Great Lakes Region, there has also been an escalation in military operations in the Democratic Republic of the Congo (DRC), with Uganda deploying troops across the border to assist the DRC government in the conflict against the Allied Democratic Forces (ADF) to flush out ADF rebels that have poised security risk in Uganda and the Eastern DRC.

The southern African region has experienced a similar situation in that attacks in Mozambique’s northern region of Cabo Delgado prompted military intervention by the Southern African Development Community (SADC) and Rwanda.  The conflict in Cabo Delgado has been taking place for several years but came to prominence this year following the attacks on the city of Palma that made news around the world.  The attack, claimed by the Islamic State, killed dozens of people, both locals and foreign nationals, which also led to the French oil and gas company Total suspending its LNG project in Cabo Delgado.

Military coups have become increasingly fashionable with democratic regimes overthrown across the continent.  In Sudan, the transition has been thrown into jeopardy with the Head of the Sudanese Military Council overthrowing Prime Minister Hamdok. He was reinstated after pressure from civil society and the international community before he resigned.  His resignation was a clear demonstration of the Sudanese Military’s unwillingness to cede power to civilian authority.  The crisis has seen a series of skirmishes on the streets of Khartoum between civilians and the Military setting into stage one of the most complicated transitions in Sudan after the ouster of President Bashir.

In West Africa, both Mali and Guinea found themselves victims of coups.  In the case of Mali, it was the second coup in 9 months, both of which were led by Col Assimi Goïta.  Col Goïta took up the position of vice-president of the transition government following months of talks after the first coup.  However, in 2021, Goïta had President Bah Ndaw and Prime Minister Moctar Ouane arrested and placed himself at the head of government. Goïta has committed Mali to produce an election timetable by the latest 2022 for the Economic Community of West African States (ECOWAS), an entity from which Mali has been suspended due to the recent coups.

In Guinea, Col Mamady Doumbouya became president after leading a coup to oust leader Alpha Condé.  Alpha Conde was Guinea’s first democratically elected president and had been in power for 10 years, with construction amendments in the works that would allow him to serve a 3rd term as president. In Burkinafaso, the coup was orchestrated by Lieutenant-Colonel Paul-Henri Sandaogo Damiba, who was recently promoted to head the country's third military region. Since 2015, the country has faced an unprecedented crisis that has killed an estimated 7 569 people in six years and displaced more than 1.6 million.

There are also threats from terrorism and transnational crime on the continent. Communal conflicts between herders and farmers over water and pasture; violent urban crime and cultural practices such as cattle rustling are also of concern because firearms have become the weapons of choice, replacing traditional and less deadly weapons. A 2017 study by Oxfam, The Human Cost of Uncontrolled Arms in Africa, estimates that at least 500,000 people die every year and millions of others are displaced or abused as a result of armed violence and conflict.

According to the Small Arms Survey (SAS), an independent Geneva-based research centre that generates evidence-based, impartial, and policy-relevant knowledge and analysis on small arms and armed violence issues for governments, policy-makers, researchers, and civil society, 80% of all small arms in Africa are in the hands of civilians. Civilians, including rebel groups and militias, hold more than 40 million small arms and light weapons, while government-related entities hold fewer than 11 million, according to the 2019 SAS and African Union study, Weapons Compass: Mapping Illicit Small Arms Flows in Africa.

According to the Institute for Security Studies, most of the weapons in Africa are imported. Official military expenditure in Africa stood at around $40.2 billion in 2018, with North Africa spending $22.2 billion and sub-Saharan Africa $18.8 billion. The top arms suppliers to Africa between 2014 and 2018 were Russia, China, Ukraine, Germany and France, and the largest recipients were Egypt, Algeria and Morocco, according to a study by the Stockholm International Peace Research Institute (SIPRI), an independent international institute dedicated to research into conflict, armaments, arms control and disarmament. Twenty-two African countries also manufacture various kinds of small arms and light weapons. Homemade artisanal weapons production is also prevalent on the continent, with those weapons reported to be fueling criminality in some countries.

While African countries can control the purchase of legal arms, it is difficult to track the illegal trafficking and flows on the continent. Porous borders and long coastlines also enable traffickers to smuggle small arms between countries. There are also concerns about how well national arms stocks are managed to ensure that the weapons do not end up in the wrong hands.  With the 2020 deadline gone, the ambitious goal of Silencing the Guns which was meant to achieve a conflict-free Africa and rid the continent of all wars and conflicts is still a pipe dream.

As the AU embarks on the new deadline of 2030, the AU must put in place systemic interventions that address strategic bottlenecks that lead people to violent conflicts, including poverty, historical injustices, inequality, unemployment, climate change, illegal financial flows, and corruption should be addressed too for guns to be silenced. The African Union should revisit its Constitutive Act to address principles that limit its ability to intervene in conflicts in member states’ territories. This will set the stage for crafting robust legislation, policies, institutions and mechanisms for long-term stability in such countries.

The continent body needs to strengthen its early warning systems so that it can predict and contain areas where conflict is likely to manifest among its member states. It also needs to equip its African standby force to provide military support in places where states have failed to establish a central Authority. Finally, it’s thus imperative to set up long-term, people-centred, innovative and inclusive measures to promote peace. Such bottom-up solutions, based on an intimate knowledge of local problems, are key to success.