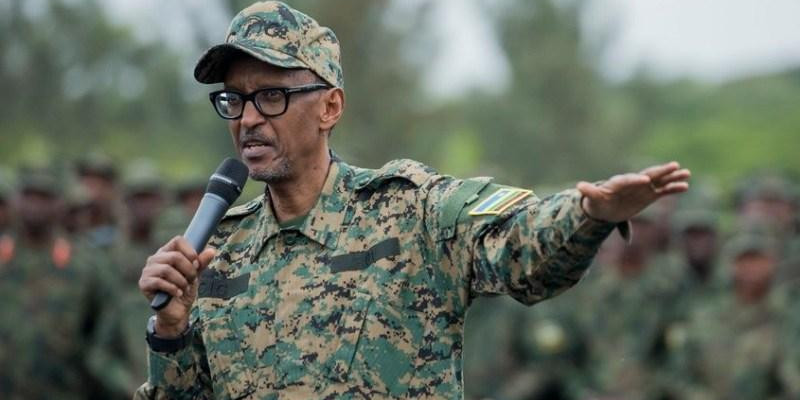 Rwanda’s recent military manoeuvres in the region have drawn the attention of observers predicting a new era of geo-political dominance that is going to unfold under our own very eyes. There’s a geopolitical turf war smouldering, the result of which could create a new regional order and redraw geopolitical alliances.  There are new spheres of influence drawn and some analysts are anticipating that the wheels of military dominance are shifting from Kampala and grinding slowly towards Kigali: a development that has seen diplomatic tensions between both countries reach their lowest ebb.

For those familiar with the intricacies of the Great Lakes region geopolitics, President Kagame’s posturing is a moment to position Rwanda as a regional bulwark of stability in an increasingly turbulent region- a role Uganda and President Museveni have unapologetically played for decades. The real issue here is how these two countries whose history is neatly interwoven and intertwined will relate in the coming years given a hot and cold relationship that has been exhibited by both Presidents. Despite her expansionist manoeuvres in the Democratic Republic of Congo, Rwanda didn’t emerge as a regional military superpower not until the Second Congo War where it gave Uganda People’s Defense Forces a bloody nose as both forces fought over control of strategic locations and the vast swathes of mineral-rich Eastern Congo.

After the guerilla war that ushered RPF into power, President Paul Kagame wanted to build a sophisticated army with its DNA divorced from the original NRA image. Rwanda Patriotic Army has transformed itself from an ill-trained into a modern army and it is not far-fetched to conclude it is one of the best-organized armies on the continent. Rwanda despite its geographical shortcomings, has expanded its tentacles in the region by contributing 5,331 troops engaged in UN peacekeeping missions which makes it the fifth-largest contributor to UN peacekeeping operations, and the second largest on the continent, behind Ethiopia.

For nearly two decades, the Rwandan army has been engaged in regional adventurism destabilizing the Democratic Republic of Congo as it jostles for regional hegemony with Uganda. Rwanda Patriotic Front has been accused of supporting proxy wars and rebellions in Congo whose legacy still haunts the mineral-rich country today. Rwanda has also been accused of pillaging Congo’s mineral and natural resources to resuscitate its economic shortcomings.

For many decades, President Museveni has been both the main kingmaker and midwife of the west’s interests. As President Museveni’s rule wanes on the horizon, there is a feeling that President Kagame is positioning himself for that very role.  Kagame is also building himself an image of a regional hegemon. His deployments in the Central African Republic and the recent one in Mozambique indicates how he has sought to harness the region’s security challenges for his nationalistic ends.  President Kagame is attempting at recreating a regional security architecture in his image and outlook.

Having largely seized control of the politics in his own country, he is now looking abroad, exploring ways of broadening horizons to expand his military power to neighbouring countries. In a recent interview, he revealed how the Rwandan government is single-handedly bankrolling its operations in Mozambique. In that same interview, Kagame’s view on military intervention depicts his vision of a military empire: a network of Rwandan soldiers sprinkled across insecurity hotspots in the region stretching from central Africa to Southern Africa. It’s a chilling reminder of Rwanda’s aggressive foreign policy: a military powerhouse with a history of military adventurism, and thus in many ways the perfect arena for the unscrupulous hegemonic designs and tendencies.

Both Rwanda and Uganda enjoyed a period of friendly relations when both countries jointly commanded the ouster of dictator President Mobutu installing a puppet regime in Kinshasha. Rwandese and Ugandan armies’ occupation of Congo was a sort of national pride that both nations gleefully rallied behind in what was skillfully packaged as a mission to pacify the region yet with benefit of hindsight, turned out to be a military adventure that saw them jostle for influence while at the same time looting and pillaging of Congolese natural resources on an industrial scale.

The clash between the Ugandan and Rwandan armies in Kisangani marked the beginning of a relationship that has been consistently hot and cold over the years. In Kampala, part of the bitter relations with Rwanda stems from historical disdain for RPF. Uganda’s army top brass underlooked and undermined RPF for a simple and historical fact: RPF was a brainchild of NRA and therefore it should always owe a sense of gratitude to President Museveni and NRM. There is also a historical grievance with UPDF circles that Rwandan troops humiliated the Ugandan army in the second war of Congo. President Kagame has always stood against the big bully mentality from Kampala asserting that Rwanda was an independent country that didn’t need to be governed on the whims of President Museveni. Relations between both countries remained tense and fragile despite a cooling period that saw both Presidents agree to end the hostilities. However, there has been a fresh escalation that has seen Rwanda close its borders since 2019 and despite efforts to diplomatically resolve the standoff, there hasn’t been any breakthrough.

President Kagame’s deployment of a 1000-person contingent to Mozambique involving Rwanda Defence Forces (RDF) and the Rwanda National Police for combat and security operations has raised eyebrows in a region that is so volatile and fragile.  In two weeks, the troops - the first foreign force to be deployed against the insurgents,have regained key areas previously held by the militants. When in March the insurgents captured Palma, the gas boom town adjoining Total's $20bn (£14bn) development of the second-largest gas field in Africa, the French oil giant abandoned the massive construction site. Mozambique's defence forces are widely regarded as corrupt, poorly trained and ill-equipped and were no match for a growing but still a rag-tag band of insurgents.

Despite opposition within his party, President Filipe Nyusi called for foreign help from Rwanda which she accepted without a second thought.  It’s reported that Rwanda’s deployment came at the backdrop of President Museveni’s willingness to offer support when he dispatched his confidant Gen. Ivan Koreta for talks with Mozambique President Filipe Nyusi over the country’s security challenges. Koreta reportedly expressed Uganda’s availability to help which was interpreted as readiness for military deployment. However,President Museveni later abandoned the idea which observers think he wanted to avoid possible entanglement of Ugandan and Rwandan troops in a foreign territory akin to one in Kisangani where both armies embarked on the offensive to air their quarrels and use the Democratic Republic of Congo as a testing ground for their artillery. Therefore, the fears that Mozambique was about to become the next DRC are not far-fetched for it presented the danger of opening up the country so accommodatingly to the toxic influences of regional geopolitics.

Rwanda is one of the troop-contributing countries to the United Nations Multidimensional Integrated Stabilization Mission in the Central African Republic (MINUSCA). The East African country deployed its latest contingent of peacekeepers comprising 750 troops to CAR on Tuesday. In 2020, Rwanda also deployed what it called “force protection troops” to the Central African Republic under a bilateral agreement on defence. Rwandan troops have played a vital role in pushing back rebels and restoring peace in their country. The central African nation has been devastated by violence since 2013, when mainly Muslim Seleka rebels ousted then-President Francois Bozize, prompting reprisals from mostly Christian militias. Last December’s presidential election the first following the signing of a peace agreement in February 2019 between the government and 14 armed groups which saw Touadera re-elected was followed by violence. Rwanda’s deployment as a member of the Economic Community of Central African states was an attempt at projecting its military prowess in stabilizing a country that has been beset by conflict and civil wars.

Rwandan Foreign Policy which is a product of President Kagame’s outlook has been for large part aggressive. Rwanda attacked DRC in the Congo wars during the heydays of the RPF and since then, has turned her foreign policy into a peculiar and vaguely sinister form of hard power that has pitted him against his godfather President Museveni in the race to become a regional hegemon and turning their countries- a cockpit of regional gunboat diplomacy. Externalizing the battlefield has been the hallmark of the RPF national security agenda. Rwanda invaded DRC on the pretext of containing external national security threats posed by the génocidaires and elements of the vanquished Rwandan Armed Forces who had regrouped across the border.

Rwanda has justified its military manoeuvres in Congo on the need to flush out Hutu extremists behind the 1994 genocide. This is a view that has won broad and unequivocal support within the donor circles and the international community. There seems to be a veiled and unwritten message here: a land-locked nation a fraction the size of Congo that was on the brink of total collapse can enjoy the privilege of being ambitious with her regional adventurism as long as that guarantees the interests of the west.

Donors have overlooked Rwanda’s hegemonistic tendencies to reinforce a narrative of Rwanda rising as a model of modern African state which has been a product of their own making. Of course, that narrative hasn’t gone without rumblings, there is a body of evidence that has cast Rwanda’s adventurism as an impediment to peace and security in the Great Lakes region. Accusations of Rwanda propping up M23 have had a dent in Rwanda’s perceptions within the donor community. The international community is torn apart when dealing with Rwanda. To continue bankrolling the government that boasts of efficiency and effectiveness of aid that has seen smart roads, better schools and flourishing businesses or limit cash flows to whip her into the line.

In Michela Wrong chilling book ‘’Do not Disturb: The story of a Political Murder and An African Regime Gone Bad, she beautifully captures the outlook of Kigali’s foreign Policy through the lens of the former fallen spy chief Patrick Karegeya. “We have chosen to externalize the battlefield and pre-empt the threat. Externalizing the war Zone is part of that policy and so is buffering. So, because of our relative sizes, we will never leave DRC, for example, until there is a government in Kinshasha we can trust” This is a matter of statecraft, of realpolitik, of existential threat and survival. Leading commentator Andrew Mwenda has argued that ‘’the evolution and articulation of that Rwanda’s national security policy has been informed largely with the real and perceived security threats it faces’’. This policy of preemption and extraterritoriality in dealing with threats to their security has been the hallmark of her foreign policy.

The history of Africa’s Great Lakes region has in many ways been a contest of who wields hard power to influence its geo-politics. Uganda has been a key protagonist in this adventurous game plan. Now it is increasingly appearing that Rwanda is firmly shaping the new contours of military adventurism. Rwanda’s military interventions from Congo to the Central African Republic and Mozambique is a testimony to her influence in the region. While it appears to be a costly undertaking for a poor country like Rwanda, she has skillfully navigated throughout these missions by striking bilateral trade deals that have Rwandan companies do business alongside deployment pacts. From Rwanda’s point of view, it’s a combination of hard and soft power.